The U.S. Brig Niagara, home-ported in Erie, Pennsylvania, is a faithful reconstruction of Oliver Hazard Perry’s relief flagship during the Battle of Lake Erie. An embodiment of the dual mission of the Erie Maritime Museum and Flagship Niagara League, she serves as the centerpiece exhibit of the Erie Maritime Museum as well as a sail training vessel, part of an experiential learning program to preserve the art of historic square-rig seamanship.

Perhaps the original vessel’s most pivotal hour came on September 10, 1813 at the Battle of Lake Erie during the War of 1812. At the battle’s climax, Oliver Hazard Perry transferred from his original flagship Lawrence to Niagara, raised his battle flag emblazoned with the words “Don’t Give Up the Ship”, and ordered the brig for “close action” – severing the British line and leading to the enemy’s unconditional surrender. Victory at Put-In-Bay opened up Lake Erie to the Americans and eventually led to the regaining of Detroit which fell at the war’s onset and lifted a nation’s morale. 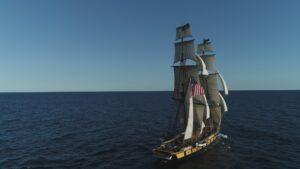 Check out some other tours and activities while you’re here!